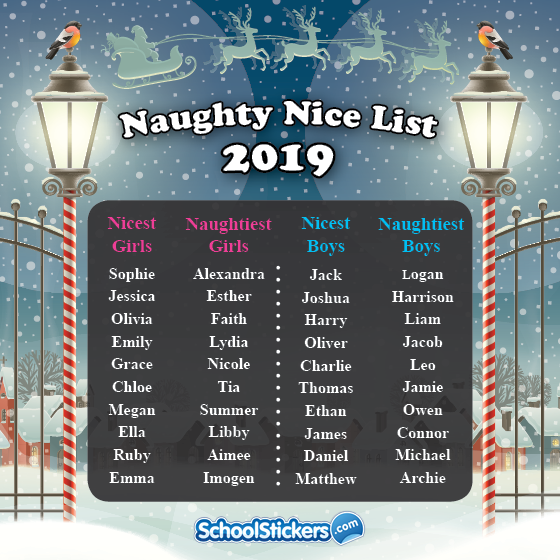 With just a month to go until Christmas we are revealing the findings of our much-loved ‘Naughty and Nice’ names list which has become a Christmas tradition, and is incredibly now in its 11th year! It’s obviously just a bit of festive fun, but people do seem to like to see each year whether their name has made the list!

The 2019 study has found that girls called Sophie, Jessica, Olivia, Emily and Grace can look forward to a visit from Father Christmas, as these are the names most likely to be well-behaved and receive rewards, and therefore on the ‘nice’ list. However, girls named Alexandra, Esther, Faith, Lydia and Nicole, are the least likely to receive rewards for good behaviour and hard work, putting them top of the ‘naughty’ list.

Boys with the names Jack, Joshua, Harry, Oliver and Charlie can relax, as they are also the pupils most likely to be given rewards in the classroom.  Logans, Harrisons, Liams, Jacobs and Leos are least likely to be well behaved and have the dubious honour of topping the ‘naughty’ list. However, all is not lost as they still have a month to improve their behaviour!

For a bit of fun we have also analysed our lists from the past decade to find out which names have frequently appeared.

Jacob, Jamie, Joseph, Liam, Luke, Michael and Owen are the boys’ names which have been in the top ten ‘naughty’ names list three times in the last 10 years. When it comes to girls’ names, Eleanor has been in the ‘naughty’ list four times, and Holly and Olivia, three.

We’ve really enjoyed looking back through the previous lists, and can’t believe that the names Sophie and Daniel have made the top 10 six times! We always say that the lists aren’t to be taken seriously as all schools reward their pupils in different ways, with some giving out hundreds, and some thousands of rewards. However, it does seem that you have a strong chance of a well-behaved child if you have a Sophie or a Daniel.